I used to feel stressed every time my kids asked me this question.  It was hard coming up with an easy, tasty, plant-based meal every single night of the week.  Especially after working all day and then shuttling kids around for an hour or 2.

I once went through a phase where I planned our meals on a little piece of paper & shopped for all the ingredients on the weekend & tried to stick to the plan.

But that system wasn’t perfect and I quickly ditched it. I’d lose the paper or the meals would be too boring & repetitive. Or I wouldn’t actually get the ingredients I needed.

So for a few years now I’ve been dealing with the dreaded question – what’s for dinner – without a real solid plan of attack.

Something must have snapped (or clicked!) for me and I FINALLY got an easy solution. 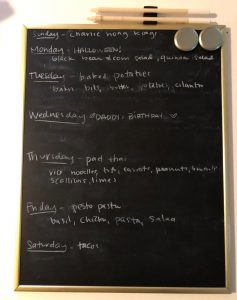 Who knew a $20 purchase could bring me so much peace during the work week? 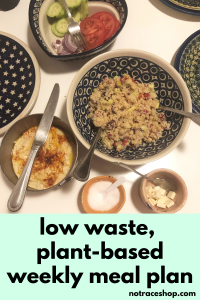 On Sundays I take about 5 minutes to wipe down the board & write out dinners for the upcoming week.  I ask the kids if they have any special requests.  I check with Elliott if there are meals he wants to cook.

I also think about any dinners I’ve been craving and add one of those on there.  I also try to include a couple of easy meals (e.g. pasta) on the list.

I also have a list of dinner ideas & recipes in my Google drive so I’ll glance at that for inspiration.  Sometimes I glance through our cookbooks or some of my favorite vegan cooking websites (NoraCooks.com & MinimalistBaker.com) for more ideas.

We aim for low waste ingredients and try to avoid packaged foods, especially plastic-packaged products.  There are a few specialty items that we get anyways (tofu, sometimes vegan cheese) because we can’t find them in bulk.

Here’s the thing about buying plastic-packaged foods: don’t go crazy over it.

It’s important to find a balance between eating low waste vs spending hours in the kitchen and agonizing over the choices you have to make.

It’s often easy to substitute a lower waste version of an ingredient, so I’m all for that.  Or we’ll just leave something out if we can’t find it unpackaged.  But we also don’t fret when we have to buy a few packaged items each week.

Making this little weekly menu is also a chance to think ahead to the week’s activities, special events, evening practices & dance classes, etc.

You’ve maybe been doing your own version of this already.  Right now you’re thinking – what is wrong with you? Why are you just now doing this?  And I honestly can’t understand myself why this has been such a pain in my butt for so long! But it has.  Go figure.

So this is our low waste, plant-based meal plan for the week that I put together on Sunday.  I also wrote out our shopping list, meal by meal, and shopped on Sunday in between shuttling the girls to their Halloween dance recital run-throughs.

We had friends over for a quick dinner before trick or treating.  Here’s what I made:

Black bean and corn salad with tortilla chips, and a Mediterranean quinoa salad.

I used the black bean & corn salad recipe from Once Upon a Chef, but I subbed organic canned corn (1 can) for the fresh version (which isn’t in season right now).  I also subbed red onion for shallots just to simplify our shopping list a bit.

I love this vegan black bean salad recipe because there’s not a ton of ingredients so it actually comes together pretty quickly.

Sooo yummy.  We usually have it with chips.  It’d be great with warm tortillas too.

We also had a Mediterranean quinoa salad based on a recipe from Vegan Huggs with a few modifications.  I skipped the tofu and instead bought a yummy vegan feta from Violife and also had real feta for the non-vegans.  I also skipped the fresh basil, but I’m sure that would be an excellent component. And I added in some chickpeas for a little more protein.

I cubed the fetas separately & served them on the side in their own little bowls so there was no cross-contamination 🙂.

I got some loose basil at Staff of Life in Santa Cruz that I’ll blend with walnuts and maybe some parsley & cilantro (if we need to use some herbs in the fridge), plus olive oil, nutritional yeast, lemon juice, & salt.  I don’t follow a recipe for pesto, I just keep adding seasoning as I make it until it tastes delish. 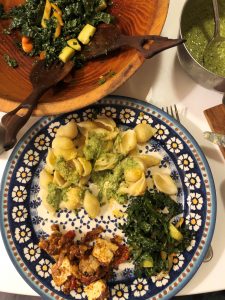 I’ll also make TVP chick’n strips.  These are called “soy twists” in the bulk bins at Staff of Life in Santa Cruz.  I cook them in water to rehydrate in the microwave & then let them sit for a few minutes.  Next I drain them and toss with olive oil, salt & pepper & nutritional yeast and roast them in the oven for about 20 minutes or so (about 400-425F).  I like to get them a little bit crunchy & roast-y. 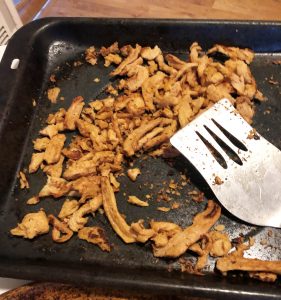 Then we’ll have a simple green salad too – lettuce, carrots, and any other veggies that are floating around (especially those cut-into vegetables we use in sandwiches).

Vegan baked potatoes with the works!

He wants to make baked potatoes with fake bacon bits, butter, scallions, and chimichurri sauce.  And we’ll make a cake too – probably chocolate but we’ll see.

We bake the potatoes & them smother them with yummy toppings.  The chimichurri sauce is just cilantro, a little onion, lemon juice, salt & olive oil.  Blend until smooth.  Yum! 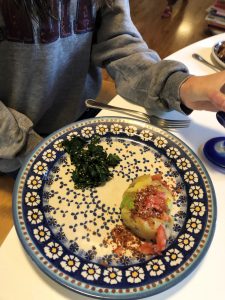 We can get the fake bacon bits in bulk bins at Staff of Life but we’ve also made them from small TVP granules.  Just rehydrated slightly then saute with liquid smoke, cumin, salt until they get a nice smokey flavor & chewy/slightly crunchy texture.

We also have sautéed greens a lot – that’s what’s in this picture.

This is definitely not authentic Pad Thai but it’s delicious! I modified the recipe from the cookbook: Moosewood Restaurant Cooks at Home

The Moosewood sauce is super simple:

And we’ll probably use linguine or fettuccine instead of rice noodles because we can get those plastic free at our nearby grocery store.

We’ll leave out the egg but make a yummy marinated/baked tofu instead.  I like to do a simple teriyaki-style marinade of soy sauce, brown sugar, rice wine vinegar, sesame oil, and ginger.

I added a bunch of small broccoli florets & onions to the pan to stir fry, then the cooked pasta & tofu, then the sauce at the very end.  So yummy and pretty fast too, especially if I remember to marinate the tofu in advance.

One of our go-tos, duh.  We haven’t been cooking beans from scratch lately but we might get on it this week.

So there’s our low waste, plant-based dinner menu for the week!

Let me know if you make any of these meals!  I always love hearing from you!