How to upcycle pants into a bag

Wondering what to do with worn out pants? 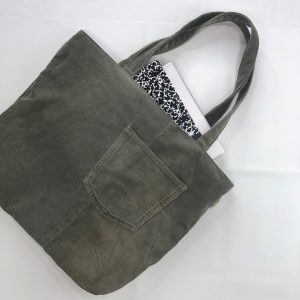 Look no further – I got you covered!

My partner rides his bike A LOT so the seat of his pants gets blown out over time – so much friction from that seat! No wonder bike riders wear spandex!  You gotta have that stretch.

These are way too damaged to patch.

So I’ve been saving these pants for a while waiting for the perfect project for them.

The first thing I did was cut the pants just below the seat. 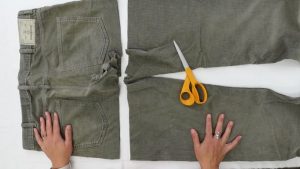 Next I seam ripped the side of the pant leg to maximize the amount of fabric I had to work with.

I ironed out the edges of the fabric. 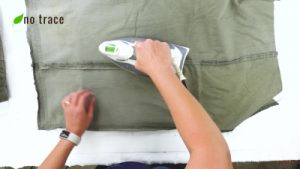 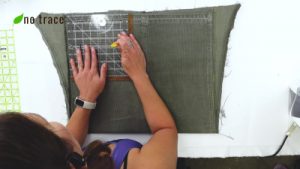 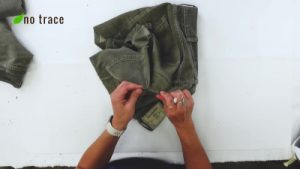 Then I pinned the pocket in place over the worn spot. 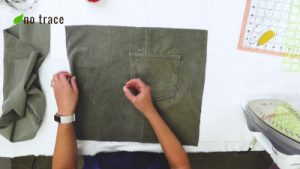 Then I sewed it.  This won’t be the most secure pocket – the back is kind of weak – but at least things won’t fall out the front of the bag, just to the inside of the bag.  I guess it could turn into a hidden entrance to the bag!

Next I found some more fabric to use as the liner of the bag & cut 2 rectangles to the same size.  This used to be the liner to a curtain.

I decided I wanted a zipper closure for this bag because sometimes you just want to toss your bag on your bike or in the trunk of your car & not worry about stuff falling out.

To figure out the size, I subtracted a few inches from the full width of the bag so there’d be room for seam allowances.  So I decided to use a 16” zipper.

I didn’t have a 16” zipper so I cut a longer one to size.  I only use metal zippers because nylon zippers are made of plastic & I try to avoid buying plastic. 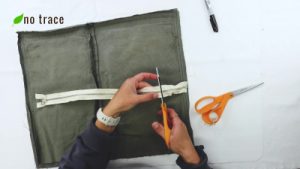 So I used my fabric scissors to cut the zipper tape & then I used my non-fabric scissors to cut the metal area.  I’m not actually cutting the metal, just the cord that runs through the teeth, but it’s not a good idea to use your nice scissors for this step because you could accidentally nick your scissors, which I did with my old ones.  The metal teeth can be wiggled apart once you cut through the cord that’s inside.

Then I added a little scrap of fabric from the pants to the newly cut end of the zipper to secure it – made it into a little tab by just sewing one side onto the top then folding over & sewing the other side on as well from the bottom. 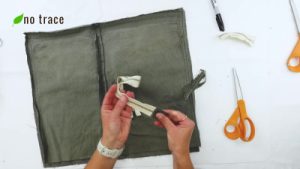 I decided to put the zipper in a gusset so the bag would open a little wider & fit more stuff.

The gussets I made from long scraps of fabric that measured 18”long x about 2.5”w – you can adjust this to a wider size if you like.  I sewed these thin pieces together on 3 sides with about 1/4” SA.

Then I turned them right side out & pushed out the corners.  I ironed the raw sides in about ¼”.

Then I put the zipper into the gusset openings & pinned it in place.  Then I stitched the zipper in place using my zipper foot.

There are lots of ways to make a zipper gusset, this is just what worked for me.

I wanted the zipper to sit a little below the top of the bag (a recessed gusset), so I measured & marked 1.5” from the top edges of my liner pieces

I pinned the gussets to the liner pieces with the right sides together so the liner is open wide.  Then I sewed them in place with a ¼” SA. 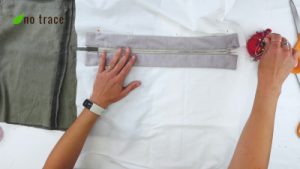 Sewing the liner & outer panels together

I pinned the liner pieces RST & sewed them with a ⅜” SA. 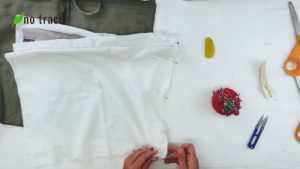 I pinned the outer pieces RST – I added a No Trace tag & sewed with ⅜” SA.

I measured a 2” square on each of the bottom corners of the liner fabric & the outer fabric & marked it out on both sides with chalk. 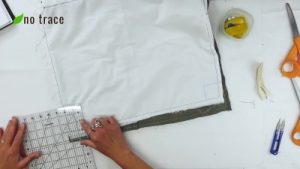 I folded the corners up into a little pointy triangle and made sure the seams were lined up with each other on the inside of the triangle.  You can usually feel with your fingers if they are lined up.  Then I pinned the triangles so they’d stay in place & sewed straight across the line that I drew on each corner. 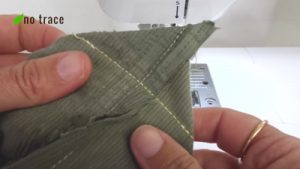 I leave these corners in place usually unless I have something I want to do with the scraps.  Right now I have too many scraps so I left the corners in place.  You could cut them off about ½” away from the seam if you prefer.

It’s time for some straps!  I used the seam ripper to open up the other leg.

I measured out a 24” x 8” rectangle for the straps.  You could make your rectangle shorter or longer, depending on the size you want for your straps.  I wouldn’t make them more narrow than 4” each though (8” total width).

Then I pressed them in half lengthwise, opened & folded the raw edges toward the center & pressed again, then folded in half again & pressed again.  So now they’re about 24” x 1” straps.

Then I topstitched along the straps about ⅛” SA on both sides.

Putting it all together

Alright – almost done! Can’t wait to add this bag to my stash!  My girls are going to be asking for it – I can already tell.  And it’ll come in handy for weekend getaways.

Okay, so I turned the liner fabric RSO and put it inside the outer fabric.

Make sure the gusset is fully open & pointed down into the bag.

I lined up & pinned the side seams.

I put the straps between the inner & outer layers & pinned them centered at 5” from the side seams. 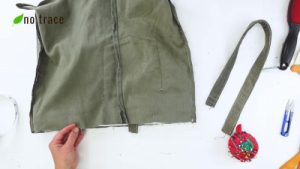 Then I sewed all around the top edge with about ½” SA, leaving an opening at the side where the gusset is sewn closed.

The (almost) grand finale! I turned it RSO through the opening I left on the side, pressed that opening with my fingers & then top stitched all around the top of the bag.

After trimming loose threads, the bag is done. Yay! 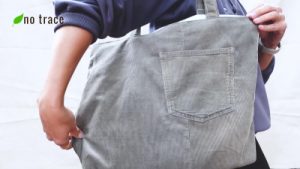